October and November have certainly been busy-busy months. Super excited that I had the chance to talk about the signature of ocean warming identified in fisheries catches globally and specifically share some first results of my research in the NW Atlantic Ocean with students, other postdocs, and faculty at Dalhousie University (Halifax, Nova Scotia, Canada) and Woods Hole Oceanographic Institution (Woods Hole, Massachusetts, USA).

All three talks summarized below, at the Biology Department seminars of Dal and WHOI, as well as at the WHOI postdoc symposium, generated stimulating and constructive discussions adding new perspectives, ideas, and suggestions for future research steps. Some topics that were raised for discussion follow below:

You can have a look further down for a summary and recording of the talk. 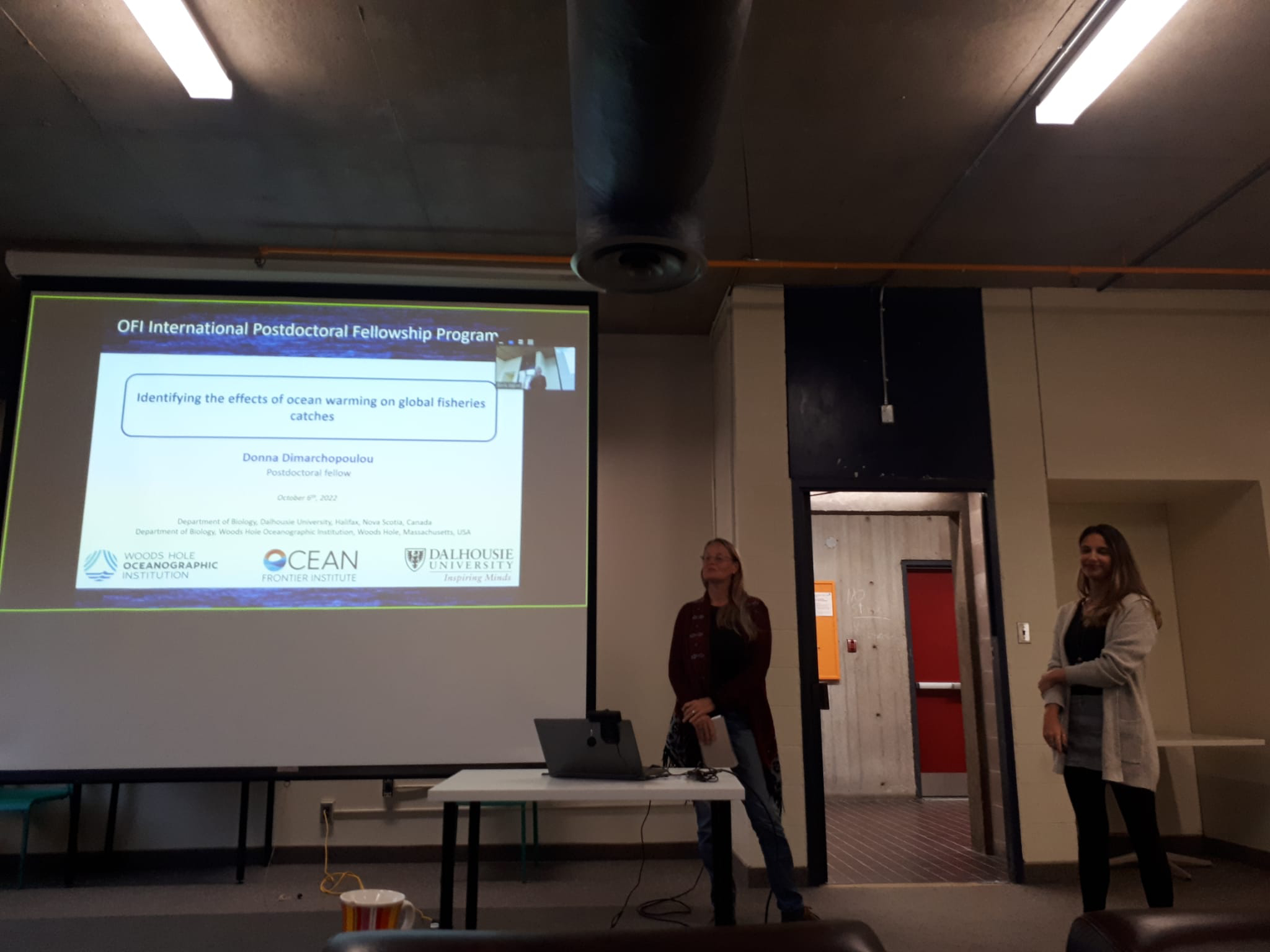 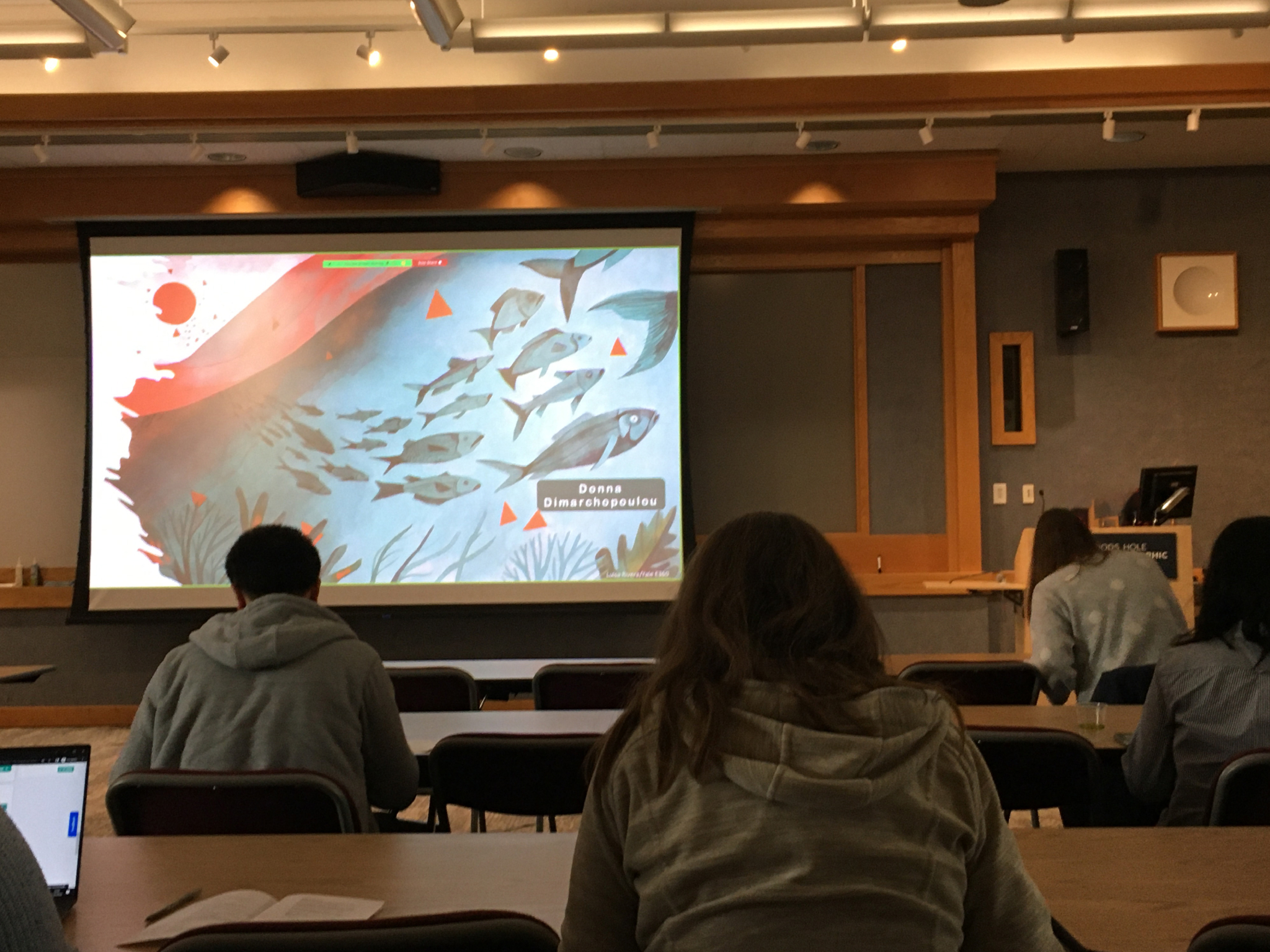 Climate change is already affecting marine ecosystems and shifting species from their historical ranges into previously unsuitable and sometimes poorly protected environments. Because of its rapid rate of warming, the Northwest (NW) Atlantic is an ideal region to study the impact of rising water temperatures on species distribution and fisheries catch. A well-established approach that has been used to assess climate-induced changes is the mean temperature of the catch (MTC) index that can identify the signature of ocean warming in the most widely available dataset for fisheries, i.e., fisheries catches. Here, we used up-to-date catch datasets from global and regional sources to detect MTC trends along a latitudinal gradient on the east coasts of the US and Canada. Variations were observed in the estimated MTC trends between the different datasets, owing to differences in the spatial and temporal resolution of the data. Nevertheless, results indicate that, overall, the MTC has been increasing in the NW Atlantic for the past decades due to a considerable decline in catches of cold-water species like cod and halibut, and a more gradual increase in catches of warmer-water species such as lobster and mackerel. The observed patterns of MTC change over time were in line with observed increases in sea surface temperature across the region. Revealing patterns of shifting fish stocks and community composition, which have consequences for seafood supply, fisheries revenues, and livelihoods, may help project future conditions and inform national and transboundary management policies in a changing climate.

Identifying the effects of ocean warming on global fisheries catches

This is my free space where I share my news and/or write about things (more closely or more distantly related to science) that draw my attention.

Close Menu
We use cookies on our website to give you the most relevant experience by remembering your preferences and repeat visits. By clicking “Accept”, you consent to the use of ALL the cookies.
Cookie SettingsACCEPT
Manage consent

This website uses cookies to improve your experience while you navigate through the website. Out of these, the cookies that are categorized as necessary are stored on your browser as they are essential for the working of basic functionalities of the website. We also use third-party cookies that help us analyze and understand how you use this website. These cookies will be stored in your browser only with your consent. You also have the option to opt-out of these cookies. But opting out of some of these cookies may affect your browsing experience.
Necessary Always Enabled
Necessary cookies are absolutely essential for the website to function properly. These cookies ensure basic functionalities and security features of the website, anonymously.
Functional
Functional cookies help to perform certain functionalities like sharing the content of the website on social media platforms, collect feedbacks, and other third-party features.
Performance
Performance cookies are used to understand and analyze the key performance indexes of the website which helps in delivering a better user experience for the visitors.
Analytics
Analytical cookies are used to understand how visitors interact with the website. These cookies help provide information on metrics the number of visitors, bounce rate, traffic source, etc.
Advertisement
Advertisement cookies are used to provide visitors with relevant ads and marketing campaigns. These cookies track visitors across websites and collect information to provide customized ads.
Others
Other uncategorized cookies are those that are being analyzed and have not been classified into a category as yet.
SAVE & ACCEPT